When I first came to Melbourne solo, about a year ago, I stayed at the Blackman Hotel from the Art Series Group.  They have a few hotels around Australia and each one pays homage to a favorite Australian artist.  The Blackman is swanky and groovy and full of paintings of oblong figures trapped in a world where gravity quit its job.  Everyone’s pulled heavenward.   Like this-

When we were all the way up in Brisbane we stumbled on this Alice in Wonderland painting one day in the Gallery of Modern Art.  I couldn’t stop looking at it.  It seemed so familiar.  The placard next to it said it had been painted by Charles Blackman.  Hmmmmmmm.  It only took me about three days to put it together.  Hello??!!! Charles Blackman?  The BLACKMAN!  This was the first of many pleasant surprises for us at the GOMA. 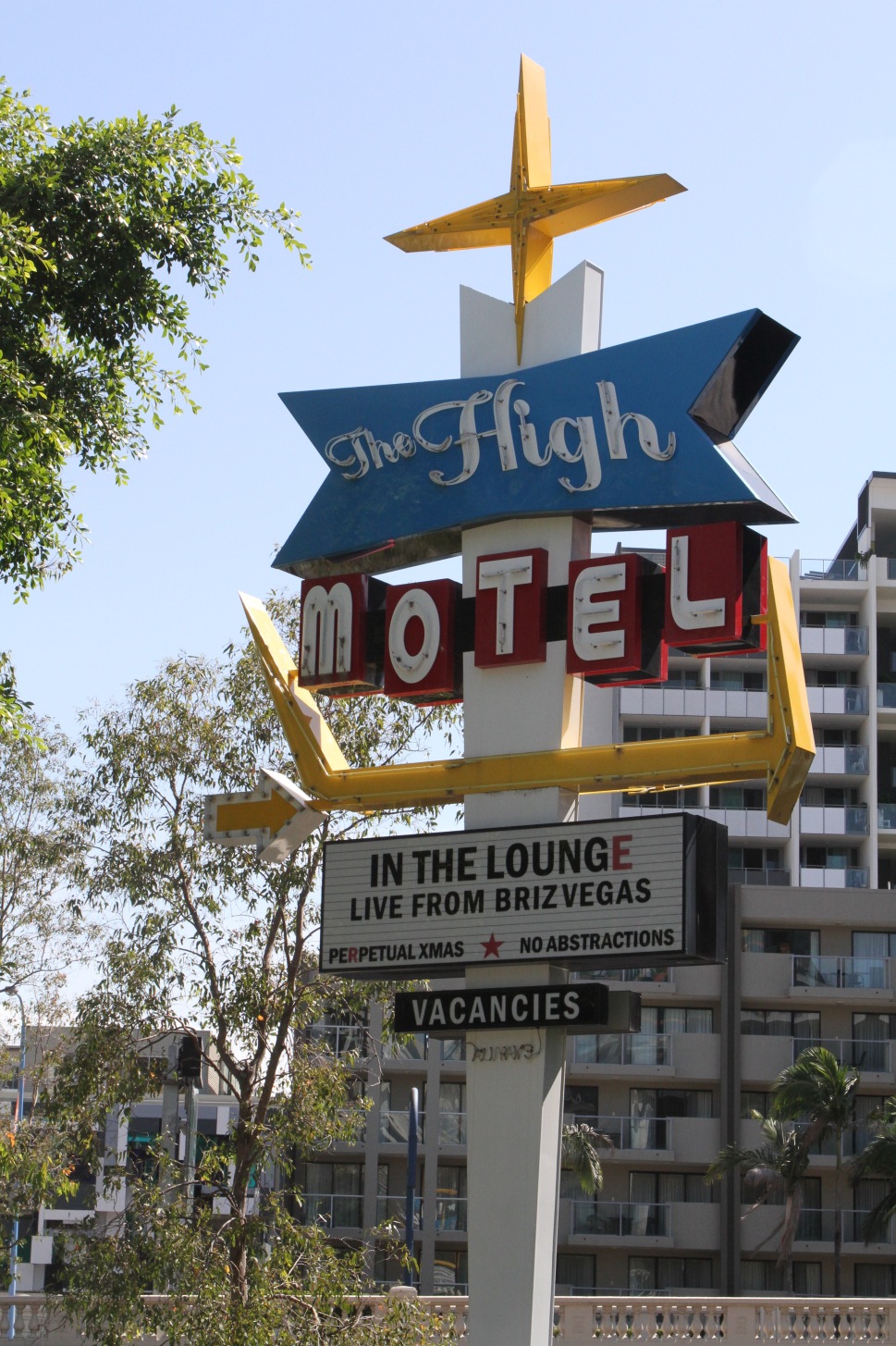 Everyone says all the culture is in Melbourne, but there is no need to look down your nose at the Brisbane Cultural Complex-especially if you have little ones.  They have exhibit after exhibit for kids and not one of them was slap dash. They were all interactive and awesome and might I add-free.  The whole place is free.  You just wander in.

The first exhibit we saw in the Children’s Art Centre was Jemima Wyman’s Pattern Bandits.  It wasn’t just psychedelic, you could leave with your very own spinning color wheel and a bandana you decorated yourself. 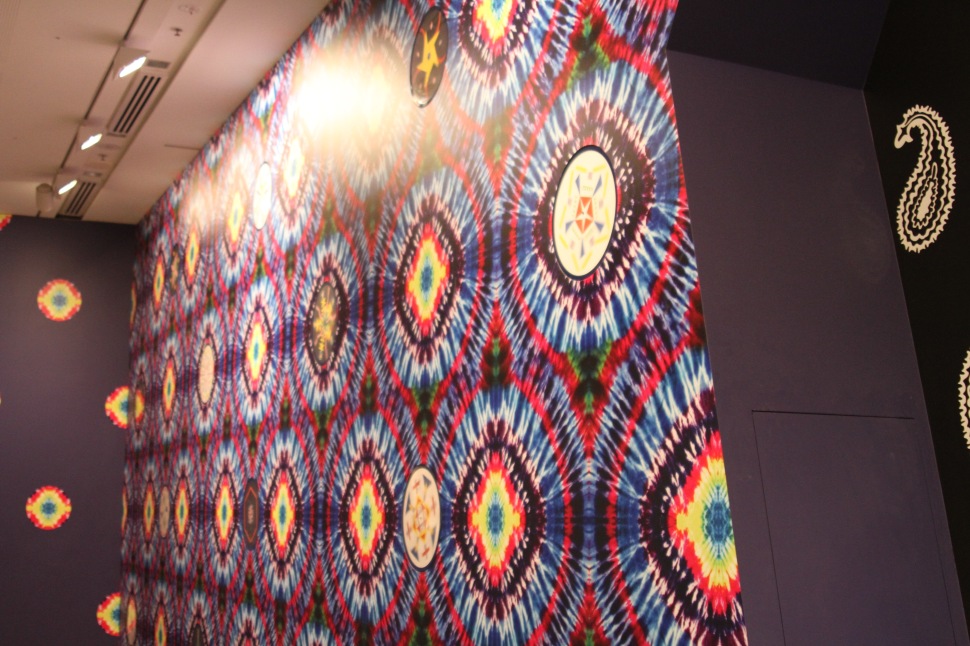 There were even televised patterns you could insert yourself into.  Who had more fun with these?  Me, or the four year old?  Me. 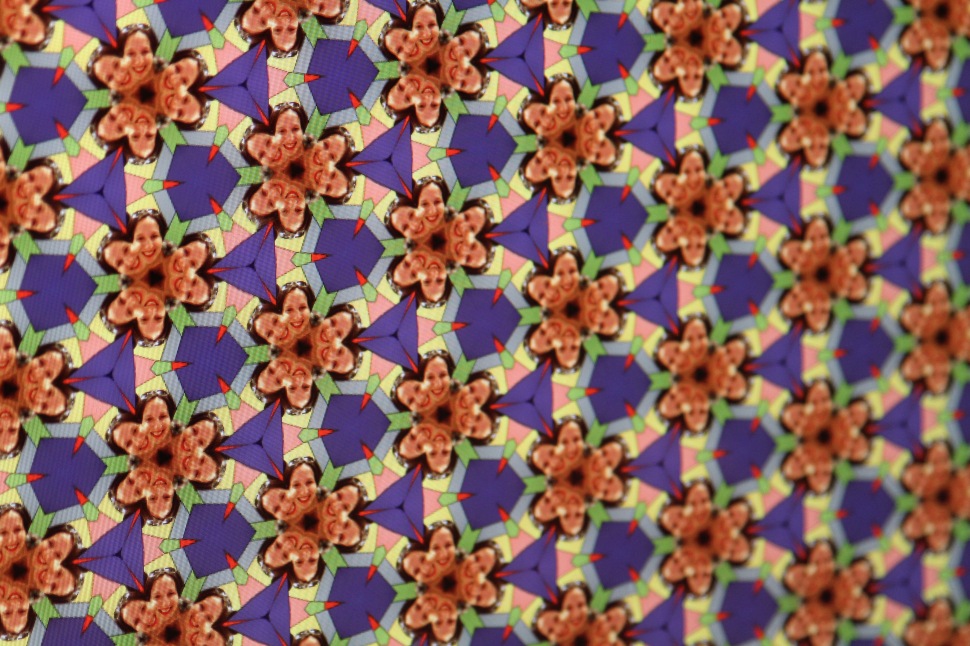 In the library portion of this cultural complex they had a Monster Field Guide project, where two very serious scientists-not children’s art workers, they swore THEY. WERE. NOT. children’s art workers-guided the children through a series of scientific methods to discover new species of Monsters.  Using various methods like remote control cars and sling shots (!!!) the kids got as much paint on a piece of paper-and themselves-as possible. 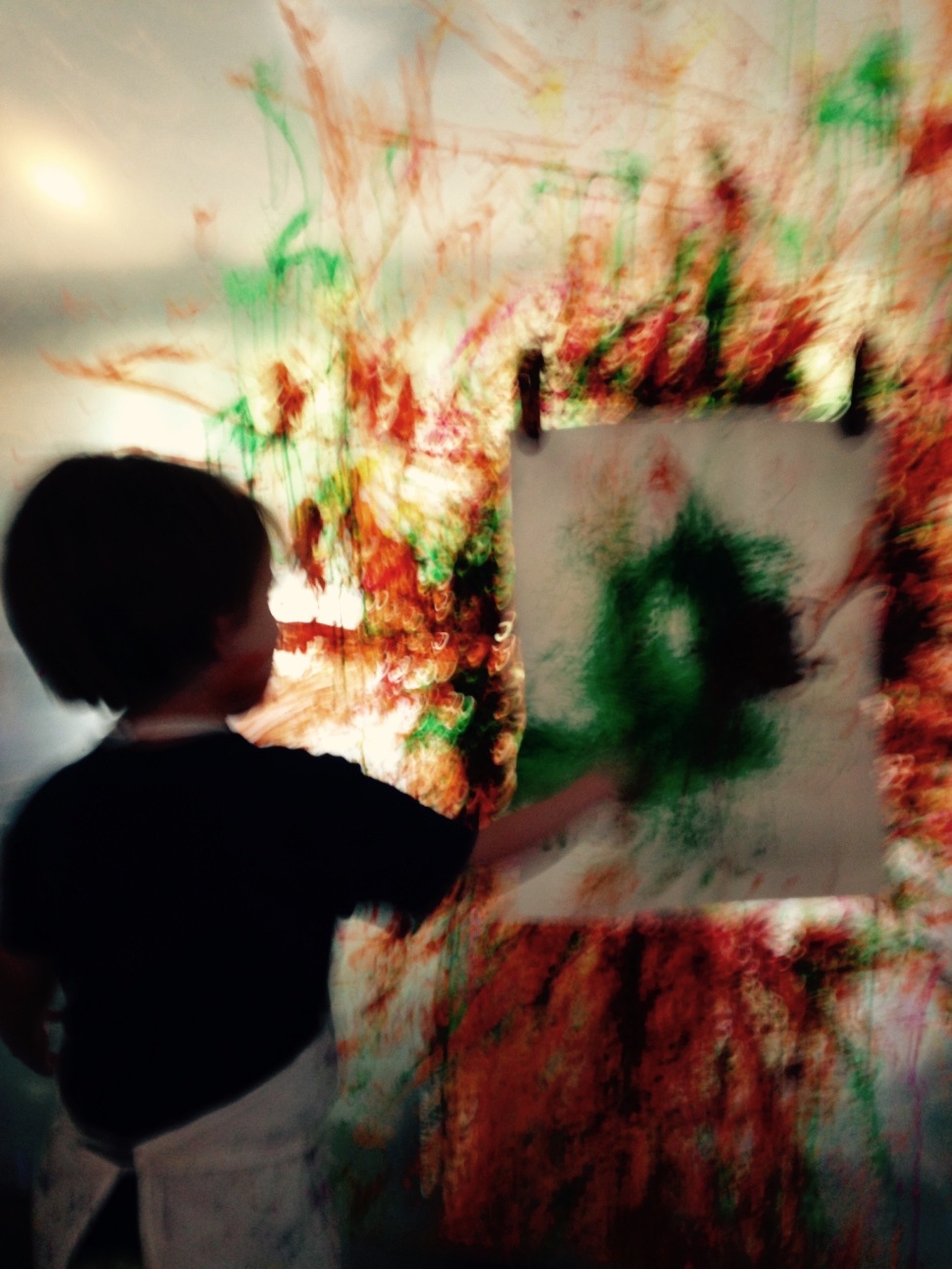 THEN, they were given a series of tools to unearth the monsters hidden in the paint.  Our son’s discovery is below- 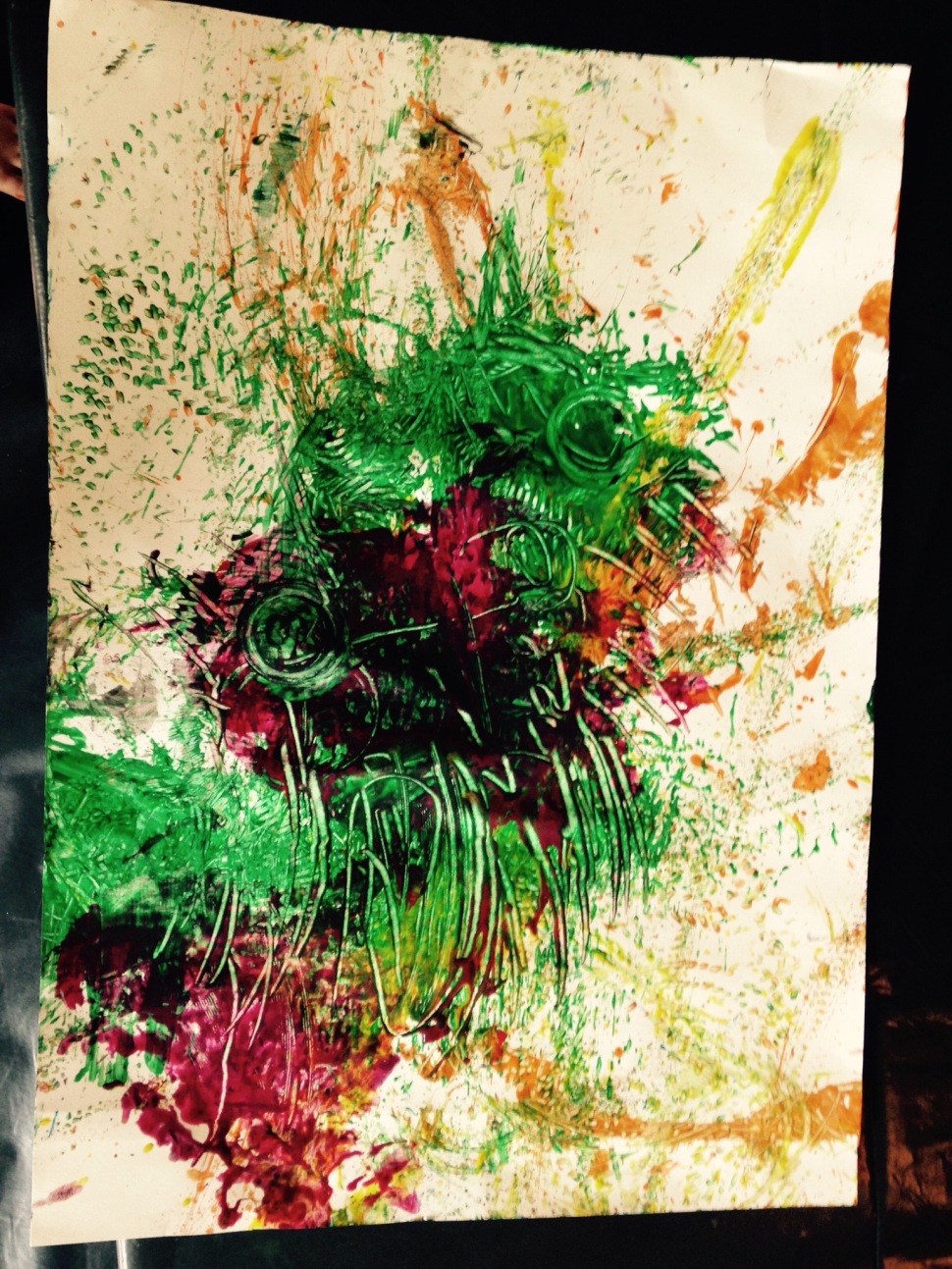 Terrifying.  Here he is explaining his discovery to the  scientists. 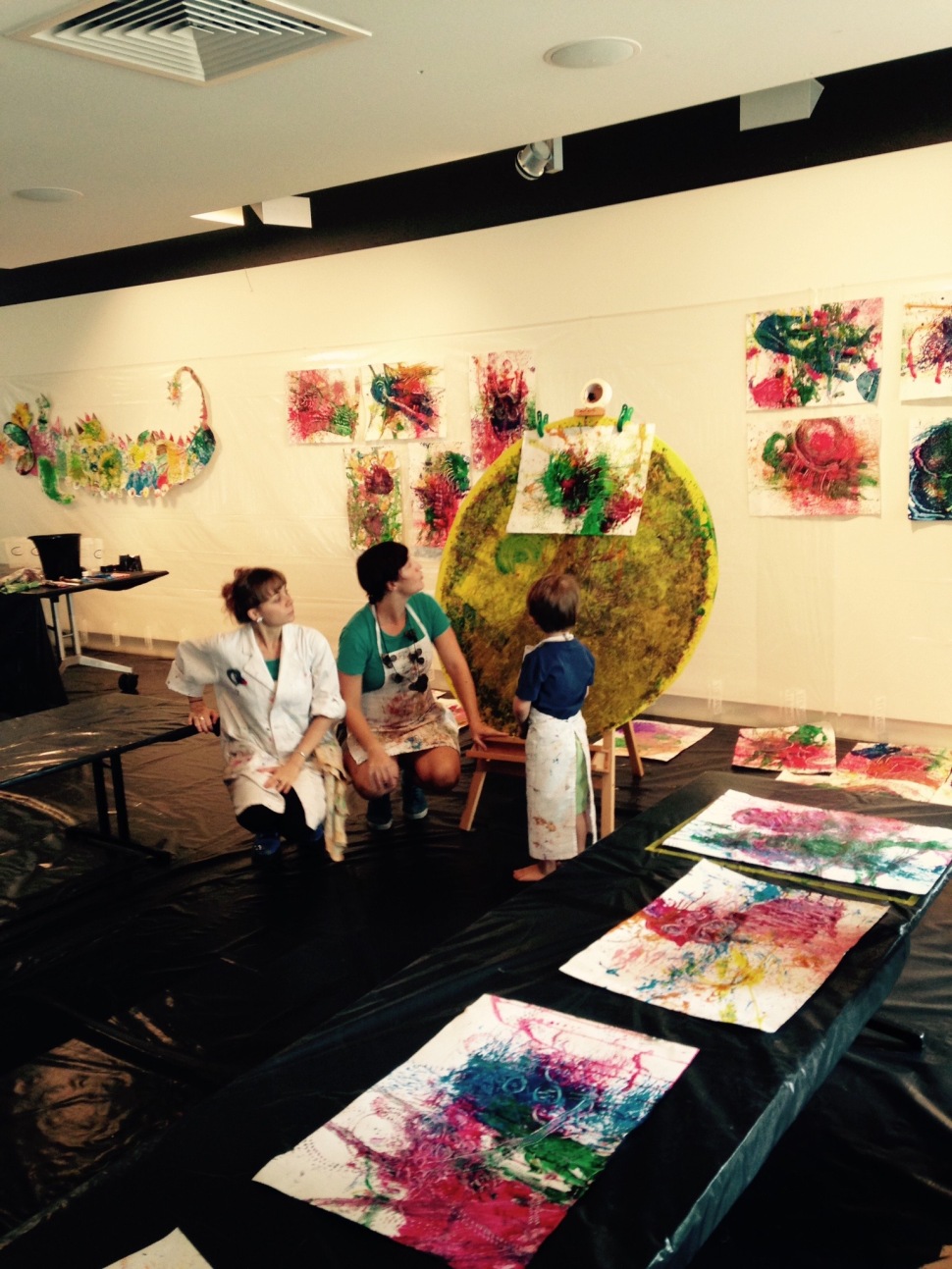 Our favorite exhibition which we frequented-because, as I mentioned, you can just wander in-was Yayoi Kusama’s Obliteration Room.  It starts out with a room that looks like this-

Then they hand each child-and maybe adult-who comes to visit a sheet of colored dot stickers.  They can be placed anywhere in the room.  The room then starts to look like this…

And then one day it just looks like this…