One of the great things about San Francisco is there is as much to ‘see’ as to ‘do.’  By this I mean, you can sit back and ‘see’ things-just look at them.  This is nice when you have a sleeping toddler, or a toddler who is awake, or no toddler at all.

You can sit and stare at things in New York too, but there’s too much hustle and bustle.  After a bit, you feel like you should get off your lazy tuckus and do something already.  Paris is comparable to San Francisco-they both have a, Let’s ponder while we gaze at something beautiful in the background, feel to them.

My favorite thing to look at in San Francisco is City Hall.  This beautiful building was plopped down in the middle of California but is reminiscent of Invalides in Paris.  I spent a lot of time looking at it while my son was at one of the two (!) playgrounds in front of it.  While Invalides has no playground I can recall, it is topped with gold so, that’s something.

After we played in the Marina Playground in the Marina district of San Francisco, we walked to Crissy Fields, sat on the beach and looked at the bay (left) while the Golden Gate Bridge hovered in the distance.  We strolled to the Fine Arts Building where I sat in a cool breeze, surrounded by lovely homes while the little guy napped.

villainous criminals in history.  We didn’t take the ferry to tour the now defunct jailhouse but we never forgot it was there as it pops up from quite a few different vantage points around town.

Golden Gate Park is ridiculously BIG, we didn’t have time to explore it.  We did go to its playground with its own carousel, but that wasn’t the highlight.  The park has long cement slides kids careen down over and over again.  They sit on pieces of cardboard boxes they brought from home.  My son indicated he wanted to see what all the fuss was about.  So I borrowed a piece of cardboard from a nice Mom, set my son on my lap and we howled all the way to the bottom.  The slide was so stinking fast we were catapulted off at the bottom and plunked onto the ground.  He squealed, “Again?  Again?”

We must have gone down fifteen more times until the one time the cardboard shot out from underneath me and my bottom was utilized as our brake pad.  Mama was done after that, so we wandered over to the Botanic Gardens-also housed in the park-just as it closed.  It didn’t matter, we sat in the grass and had a snack as we gazed at the view above. 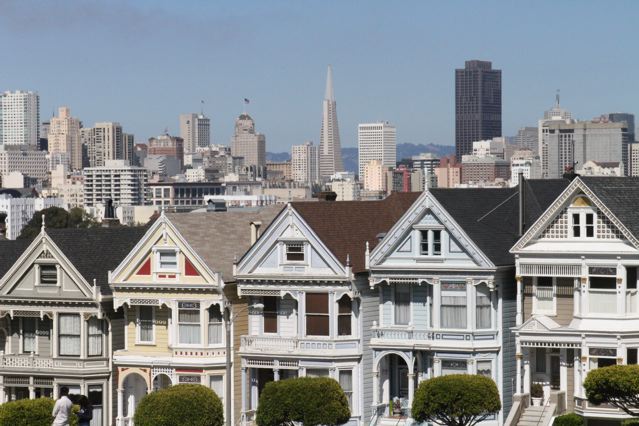 And then, the iconic San Francisco shot of the Painted Ladies.  I took this one all by myself, thank you very much.  Painted Ladies is a colloquial term for these Victorian houses painted in four or more colors.  There are examples of them in different cities across the US-these are the most iconic.  They’ve been used in films and advertisements for years.  Even my husband said, “Oh yeah, the houses from that cel phone commercial?”

These beauties are nestled across the street from a grassy field called Alamo Square.  It’s filled with people taking the exact photo above.  The view from the adorable playground next to the grassy knoll of Alamo Square, below-

Lovely to look at while your little one burns off steam on playground equipment that looks like this, below- 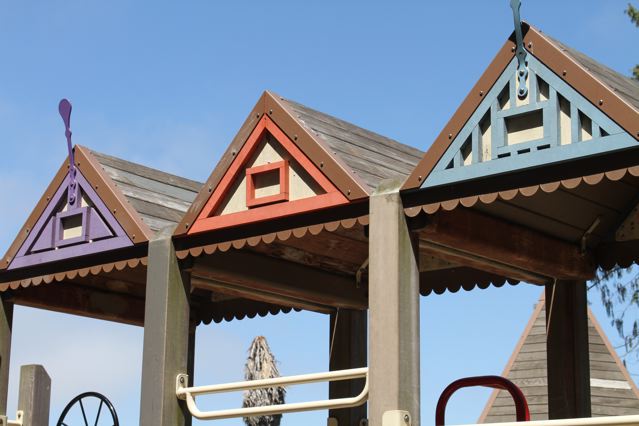 which, of course, is supposed to look like this, below- 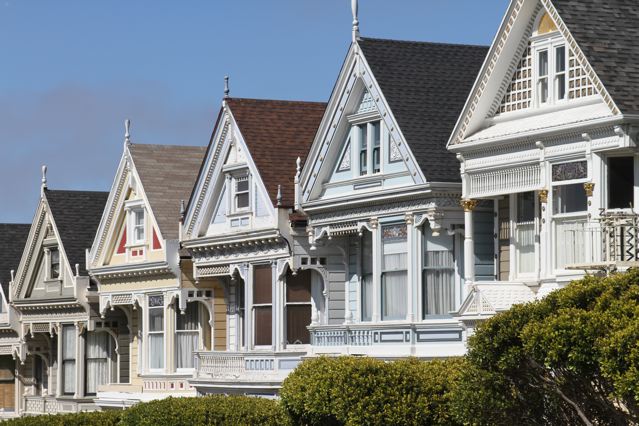